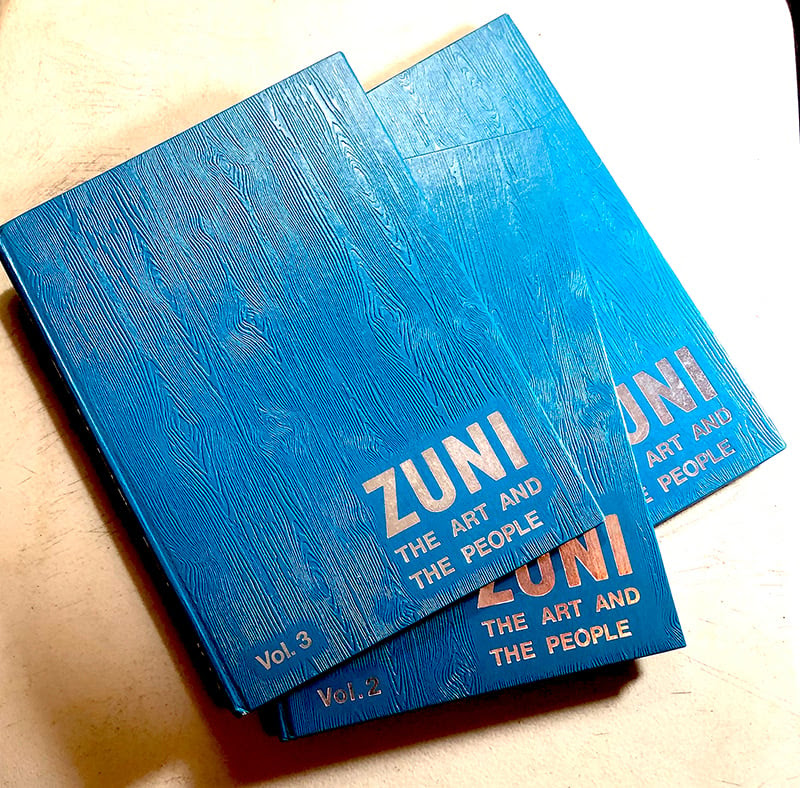 ZUNI: THE ART AND THE PEOPLE

We complain all the time about so many silversmiths deliberately not signing their work well up into the Fifties and how nice it would be if everyone had marked their pieces, but that is not always correct. The signature of two letters LL has two or three takers at any moment, though the two most prominent ones are both gone.

Lavonne Lalio, whose sister Arvella runs the Zuni jewelry co-op, has been the front runner for years.  But in fact, Lavonne did not make jewelry.  Years ago someone asked me to find information about the girl in the first Arizona Highways collector’s edition on Jewelry [ Jan. 1974 p.19.] More specifically the partly visible solid turquoise knifewing necklace she is wearing. Her name appears in the photo caption as Janice Bowekaty.  I thought finding her would be easy, but the necklace was almost certainly gone.  I was wrong on both accounts.  Esther Henderson took the picture in 1959 at Ceremonial.  Finding Janice was not difficult but she told me the image had come up many times over the years.  She was not the girl with all the jewelry on display.

When I finally found out who it was and called on her she was surprised to see the picture.  Because of the wrong name, nobody had ever asked her about it.  When I said she probably didn’t know what became of it she disappeared into the house and came back with several of the pieces.  I kept it up and said I didn’t expect her to know who the maker was.  Wrong again. It was the creation of her grandfather Henry Caweyuka, a completely unknown jeweler. Lavonne let me photograph the pieces she had.

What doesn’t follow is her name attached to an inlaid hoop dancer.  One dealer called him a rope dancer which is just as accurate.  In the curious way that things happen a dealer in New York said it was Larry Laate. He had once been married to my late sister-in-law. With a real name to go on I started running down folks who knew or were related to Larry.  He had once been with Janet Amesole who is best known for her eagles. When I found her I unexpectedly got the rest of the story. Janet is a daughter of Madeline Beyuka and grew up in that household.  Eddie had given her some designs and that particular one was stolen by Larry.  She had the pattern to prove it.  So the design went from Eddie Beyuka to Janet and then to Larry.  The reason for all the translations of LL is easy to explain. Honestly, Larry Laate is I minor artist from a famous family so it wasn’t a name known to many dealers.  And there has always been the impulse to put famous names on pieces to demand more money.  That still doesn’t explain how, or why, Lavonne Lalio got in the game.